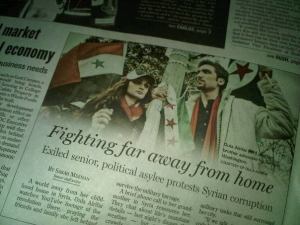 A world away from her childhood home in Syria, Oula Alrifai watches YouTube footage of the revolution there, praying the friends and family she left behind survive the military barrage. A brief phone call to her grandmother in Syria reassures her. They chat about life’s mundane details — last night’s dinner, the weather — but never of the crowds protesting outside her grandmother’s front door and the military tanks that still surround her city.

“If we talk, we have to talk in code because there’s a revolution,” said Alrifai, a senior government and politics major. “Everything is monitored; the phones are monitored.”These check-up calls and cellphone videos from protesters on Syrian streets are the 25-year-old Alrifai’s only glimpse of life in Syria. The country’s dictatorial regime operates skewed news outlets, taps phone lines and does not hesitate to remove anyone who challenges its legitimacy, she said.

It’s this pervasive corruption that Alrifai said made her parents and her younger brother begin to protest years before a revolution erupted March 15. It’s also the reason this family of political asylees may never return to Syria — going back would be a death sentence, Alrifai said. She now supports her homeland from abroad. Since the first day of the revolution, she said she has spent every Saturday in Washington, rallying support for Syria by day and lighting candles for the country’s martyrs at night.

But Alrifai said she would sacrifice anything to stand alongside her countrymen instead of campaigning overseas.

“I really feel that I want to be on the streets with them and protesting with them, and I don’t mind if I get killed because I want my country to be free,” Alrifai said. “Inside me every day, I wish that I was there. I just want to be with them.” Alrifai’s mother and stepfather cultivated a passion for freedom and civil rights in their daughter from a young age. In 2002 her parents established the Tharwa Foundation, a non-governmental organization dedicated to stamping out human rights violations in Syria and nearby countries.

But the organization’s mission did not align with Syrian President Bashar Assad’s goals, Alrifai said.”We were maybe one of the first families to start saying no and to speak in public about the problems we had, and we paid the price in being exiled,” Alrifai said.In spring 2005, government officials summoned Alrifai’s parents for several rounds of interrogation, and their threats of execution eventually forced them to shutter the office, she said.

Assef Shawkat — then head of the country’s military intelligence agency and the president’s brother-in-law — questioned her stepfather one last time before Alrifai and her family fled the country. He gave him a choice — stay in Syria and join the government’s regime or continue working against the government and be killed, she said. In the months that followed, Alrifai’s family was kept under constant surveillance. Assad’s security forces tailed their every step and wired their phones, she said.

Fearing for their lives, Alrifai’s parents acquired visas from the U.S. embassy and started packing. Alrifai arrived in the United States on Sept. 7, 2005 — five days before her 19th birthday — angered and confused by the injustice she said muscled her out of the only home she’d ever known. “Syria is my country, my home,” Alrifai said. “It was really difficult to leave it; I did not want to come here or go anywhere.” Alrifai has lived in Silver Spring since she left Damascus, the Syrian capital.

She organizes protests at the White House and serves on the board of the Shbab Elbalad Movement — a Syrian youth campaign her 21-year-old brother founded.”I feel that I’m doing good here too, to raise awareness,” Alrifai said. “I’m trying to get their voice heard.” Arabic professor Sahar Jendi said she attended one of the protests Alrifai organized in Washington. “The only thing that [Syrian-Americans] can do is keep participating and keep raising our voices high for freedom, justice,” she said.

Despite seven months of peaceful protests, Assad’s regime has yet to crack, and the government continues to use military force against its own citizens, she said.Alrifai’s brother, Mouhanad Abdulhamid, said supporting the revolution hits home because his family has invested years in the struggle against the Syrian government.

“It makes it more personal. It’s not just, I’m doing something for my country; I’m doing something for me,” Abdulhamid said. “We have a long history fighting this regime.”And now, Alrifai said, the rest of Syria is speaking out, too.”The youth in this revolution are saying the same thing to their parents and their grandparents: We can’t be silent anymore,” Alrifai said. But this fearlessness comes at a cost, she said.

“I know we’re paying a heavy price, and I see kids being tortured and young people being imprisoned, including my friends,” Alrifai said. “But I know that we’re gonna reach our goal at some point. This regime is not legitimate anymore.” Alrifai will graduate in December and said she plans to pursue foreign service and international law in graduate school. Though she hopes to return to Syria one day, Alrifai said she will continue her support from abroad until her homeland is free.

“I don’t think I can go anytime soon, unless I smuggle, and of course no one will let me do that,” she said.