Last decade, Assad’s regime fooled Washington into believing that he would bring about reform. He did not. The lack of institutional and economic reforms led to the uprising and civil war in Syria. It is a shame then that Assad is fooling Washington a second time, now arguing he is the lesser of two evils compared to ISIS, an argument that has influenced Secretary of State John Kerry, who is now calling for negotiations. Assad’s regime is just as bad as ISIS. If Washington falls for Assad’s manipulation and deceptions again, what will be the result? The stakes are greater now than in the last decade and the security situation more tenuous, so why would anyone put trust in a regime that has not only failed its own people, but also blatantly conned Western leaders not once, but twice?
Assad’s “reforms” were nothing more than a thin cover for further corruption. There was never a real intention to improve economic or living conditions. Not only was the international community fooled, but many Syrians bought into the lies. It did not take long for the “ophthalmologist” to be proven short-sighted as protesters took to the streets in Damascus in February 2011 chanting “Syrian people will not be humiliated!” Forty percent of Syria’s population was living under the poverty line and more than twenty-five percent of young men were unemployed. Consequently, many Syrians were immigrating to neighboring countries looking for work and a better life.
According to United Nations Development Programme (UNDP), between 2003-2004, two million Syrians could not obtain basic needs. Fifty-six percent of Syria’s rural population depend on agriculture for survival, and in 2004, more than seventy-seven percent of them were landless. Today, the situation is substantially worse despite Assad’s June 2014 referendum campaign dubbed“Sawa” to “improve” Syria’s economy. In fact, the overall poverty rate has now reached eighty percent.

END_OF_DOCUMENT_TOKEN_TO_BE_REPLACED 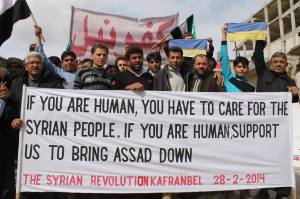 Velvet revolutions are desirable, but a revolution, by its nature, is an extreme solution to an extreme situation. Revolutions often turn violent, igniting civil wars and attracting extremism – whether in individuals, ideologies or agendas – overwhelming moderate voices, the voices of reason.

This is our story in Syria today. The new hegemonic power emerging on the scene is political Islam in its most radical manifestation. Unless we can identify the reasons for this development and find ways to address it, the possibility of a return to peace and stability in the country and the achievement of communal reconciliation while respecting the democratic aspirations of the people will be next to nil.

The ongoing radicalization of Syrian rebels is in no small part a product of the violent crackdown initiated by Bashar Assad’s regime. It sought from the very beginning of the revolution to eliminate the young and moderate leaders of the initially nonviolent protest movement through detention, assassination and dislocation.

By embarking on a violent campaign against the early protesters and their host communities, Assad created an environment of anger and despair that by its nature was conducive to the emergence of extremist elements. The regime, as it has done since the 1970s, ensured that chaos would survive. Previously, it had done this regionally in such places as Lebanon and Iraq, but it now applied this in Syria. Hundreds of extremists were released from regime prisons, and Assad exploited the negative consequences to his advantage, re-engaging with the international community with Russian and Iranian backing.

The negligible support that moderate rebels received from the international community, often in the form of nonlethal aid such as communications equipment and night-vision goggles, at a time when Gulf donors were busy supplying cash and weapons to more extreme factions, proved another crucial factor in the ongoing marginalization of moderate elements from the scene, allowing for the effective hijacking of the revolution by extremists.

The choices confronting pro-democracy activists are now harder than ever. Discrepancy, confusion, loss and a deep sense of betrayal tend to color the view of most at this stage. What is happening in their circles is not a clash of ideas, however.